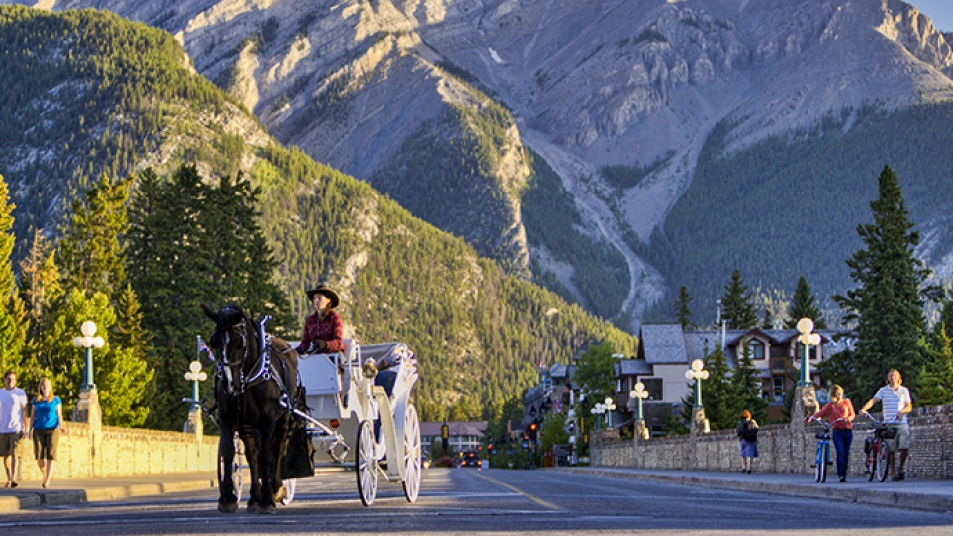 They knew it right away—the world was going to want to see this place.

In 1883, three railroad workers happened upon clouds of steam billowing out of a cave in the heart of the Canadian Rockies. Inside, they discovered the hot springs that would lead to the creation of the incomparable town of Banff and Canada’s first national park.

Banff was designed as a traveller’s dream destination.

Its main street—Banff Avenue—is even oriented to offer the best view of Cascade Mountain. You’ll find the patios and terraces of top-class restaurants filled with people reveling in the incredible surroundings. Local shops and art galleries line the picturesque streets that from time to time witness a deer commuting through the town.

The town is in the middle of Canada’s first national park.

To protect the area around Banff’s hot springs, the Canadian government deemed the land off limits for sale, eventually creating Banff National Park. A seemingly endless landscape of soaring mountains, pristine forests and turquoise glacial lakes, the park has captivated visitors throughout its history. Today, Banff and Banff National Park are part of the Canadian Rocky Mountain Parks UNESCO World Heritage sites. What does that mean? It means that the views everywhere in this area are simply incredible.

Banff Upper Hot Springs have lured visitors for over 125 years.

Inspired by the “water cure” craze of the late 1800s, people flocked to the springs to soak up the rejuvenating properties of the mineral-rich waters. Still a major draw today, you can soothe your body in the steaming hot water, gaze out at the lush forest and rough mountaintops, and understand what has drawn generations of travellers people to this little piece of heaven. The Hot Springs are just 2.5 miles away from the town center and are easily accessible by taxi or Banff’s public bus service.

You can take a gondola to dinner…on top of a mountain.

The Banff Gondola travels to the summit of Sulphur Mountain in a spectacular eight-minute ride, replacing a strenuous hike with a comfortable seat and aerial views. At the top, you’ll find a 360-degree rooftop observation deck, a restaurant where every table has a breathtaking view, and an interpretive boardwalk that lets you casually explore the mountaintop, including the historic Sulphur Mountain Cosmic Ray Station.

It’s just you, a canoe, and nature.

Nestled between the towering peaks of Banff National Park are dozens of serene, emerald-green lakes. When the only sounds are the dipping of your paddle, a light breeze and the occasional call of a harlequin duck, the “real world” just melts away, leaving you fully in the moment. Moraine Lake is the perfect spot for a morning canoe ride. Its location in the Valley of the Ten Peaks frames the lake with lush forest and mountains that rise directly from the water’s edge. Rock flour from glacial melt turns the water a vibrant turquoise that almost seems unreal.

It has a smaller, quieter sister.

A short drive from Banff is the hamlet of Lake Louise. For an even more casual pace, a night in Lake Louise further enhances the feeling of being immersed in the splendors of the Canadian Rockies. It’s also a perfect morning stopping point before taking in the world-famous views of the lake for which it’s named.

You can walk on a glacier.

The Icefields Parkway has been called one of the best drives on the planet. Connecting Banff to the mountain town of Jasper, this 140-mile road took a decade to build, running beneath massive peaks and alongside glaciers. The views around every curve of the road will make you want to pull over and take it all in, which you can at the many scenic overlooks. A stop at the Athabasca Glacier offers the once-in-a-lifetime opportunity to walk on a 10,000-year-old piece of ice.

There’s a castle in the mountains, and you can stay there.

To make it easier for people to access the remote area surrounding the popular hot springs, the Canadian Pacific Railway commissioned a luxury hotel to be built—the aptly named Banff Springs Hotel. While the original wooden hotel burned down in 1926, it was rebuilt as an opulent stone castle that echoed the glamour of the iconic era. A stay at the Fairmont Banff Springs Hotel, as it’s called today, is certainly a luxurious experience, just one of many charming and beautiful hotels in this Banff to choose from.

Originally called “Siding 29” by the Canadian Pacific Railway, Banff is a train town to its core. Our train—named the “Best Train Experience in the World” by the Society of American Travel Writers—journeys in and out of the historic Banff Railway Station on our First Passage to the West rail route.”Onboard guests are treated to an unparalleled Canadian Rockies experience, travelling by day in luxury, bi-level, glass-dome coaches in GoldLeaf Service and a stop in Kamloops, British Columbia, at night to recharge in comfortable hotel beds. This is truly a case where getting to and from Banff is just part of the fun—the views along the way are remarkable.

Get 4 free perks with our best offer of the year: 2X Hotel Nights, 1X Airport Transfer, and 1X Dinner when you book a qualifying 2021 package of 5 days or more.