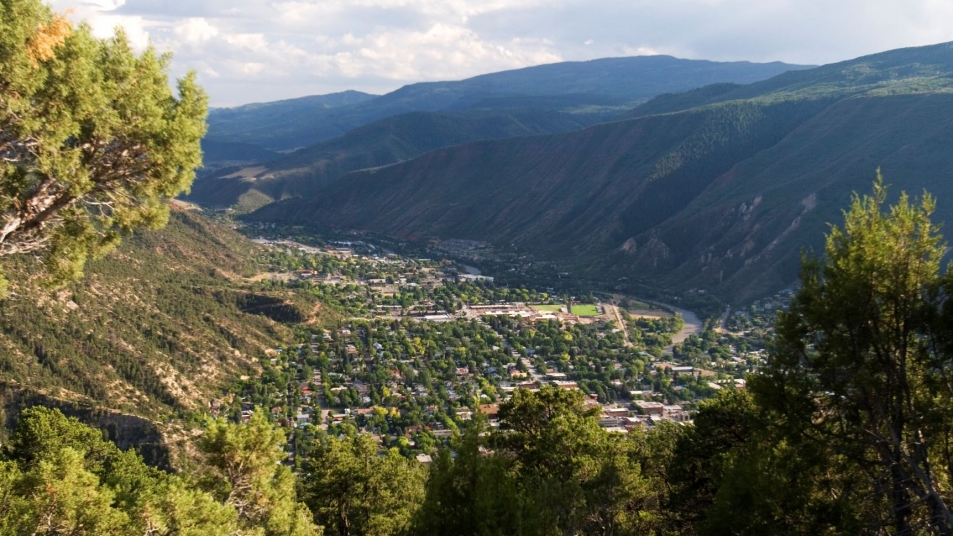 Gangsters. Gunslingers. Good time gals. Strolling the streets of the tranquil town today it’s hard to imagine the history of Glenwood Springs as a rowdy frontier town of yesteryear. Built on a rebellious spirit, the town boomed into life as a mining settlement called Defiance. Embodying the essence of the Wild West’s rule-breaking spirit, shady characters frequented noisy saloons, spilling out onto muddy streets and back into brothels, before retiring to their rustic tents along the river.

Nestled in the heart of Colorado’s Rocky Mountains, idyllic Glenwood Springs sits at the confluence of the Colorado and the Roaring Fork rivers. This “land of water” was treasured by the original inhabitants, the nomadic Indigenous Ute people, who revered the area’s 50 hot springs and used the natural vapour caves at Yampah (Ute for ‘Big Medicine’) as a place of respite and healing. Here they constructed the first sweat cave on the south bank of the Colorado River, making an opening in the roof of the cave to lower in sick people.

Word spread of the healing hot springs, bringing curious explorers to the area. By the mid-1800s the government began surveying the area for minerals, even though they had no claim to it.  In 1868, the well-respected Chief Ouray, a Tabeguache Ute, negotiated a treaty protecting ancestral Ute hunting grounds. Despite this treaty, prospectors including John Blake established a wooden fort on the Flat Tops area of Glenwood Canyon in 1878, naming it Fort Defiance.

Tensions grew and the Ute rose up with a bloody rebellion against Nathan Meeker, the White River Agency’s Indian Agent, after he tried to force them into labour following an 1874 government treaty that took four million acres from the Ute in exchange for $60,000 worth of promises that were never delivered.  After the Meeker Massacre, the Ute people were removed from their lands in 1880 and put into reservations.

The land opened for settlement and Blake used his Fort Defiance claim to establish a new town site at the confluence of the Grand (now Colorado) and Roaring Fork Rivers in 1883. The town was named Defiance in keeping with the spirit of the first staked land at the fort.

Defiance boomed. Blake’s wife Bessie was the town’s first madam, opening up a brothel on 7th Street to sit alongside the saloons and stores that had sprung up to serve the increasing numbers of miners, trappers, and traders rushing to the region.

The glittering promise of wellness tourism

Speculation wasn’t just about minerals. Entrepreneur Isaac Cooper and silver baron Walter Devereux saw the golden opportunity of creating a hot springs resort for tourists in town. Cooper had the townsite’s name changed from Defiance to Glenwood Springs—named after his wife’s hometown of Glenwood, Idaho — and the Glenwood Hot Springs Company was born.

The renamed town began to shine. Renowned Austrian architect Theodore Von Rosenberg was brought in to add European grandeur to the red brick bathhouse design at Glenwood Hot Springs Pool, which opened in 1888 to much fanfare. Tycoon Devereux went to great lengths to create this “spa in the Rockies” – even rerouting the Colorado River to create the world’s biggest mineral pool. In 1893 he opened the opulent hillside Hotel Colorado, which was based on an Italian villa design, and she quickly became the grande dame of the region.

Devereux’s first spark of genius had been bringing electric lighting to the town in 1886. His coal-fired, steam-driven electric power plant put Glenwood Springs on the map as one of the first cities in North America to get electricity, creating opportunities for other entrepreneurs too. Local attorney and landowner Charles Darrow used this new technology to illuminate the ancient Fairy Caves in Iron Mountain. They opened to the public as a magically colourful attraction in 1886 and were ambitiously marketed as the “Eighth Wonder of the World”.

Tourism and trade ride the wave of rail travel

Glenwood Springs was ready for a tourism revolution and it came in the form of the railway opening in 1887. Previously Glenwood Canyon’s steep sides and river rapids meant that visitors needed to go over the Flat Tops to avoid the treacherous canyon. The race was on for one of two railway companies to be the first to arrive. The Denver & Rio Grande company won by just a week, after constructing a route that blasted through the south-side of Glenwood Canyon. This railroad will be the one to host our Rocky Mountaineer Rockies to the Red Rocks rail route.

Tourists came in droves and needed places to stay. Train travellers arriving into Glenwood Springs in 1907 were greeted by four saloons, two rooming houses, a restaurant, and a grocery store opposite the station. Here, Art Kendrick established the Denver Rooms above the store and, after Prohibition in 1916, he bought the surrounding saloons to eventually create the Hotel Denver. Chicago gangster Leland A. Varain (aka “Diamond Jack Alterie”) was the hotel’s most infamous guest after he shot two men at the Hotel Denver during one of his visits in 1932.

Planning your trip to Glenwood Springs

Explore Glenwood Springs on our Rockies to the Red Rocks rail route, home to healing hot springs and a world-class wellness destination. Search our carefully curated packages and start planning your future trip to the 'Real' Wild West today.

Thanks to Visit Glenwood Springs for the images provided in this post.