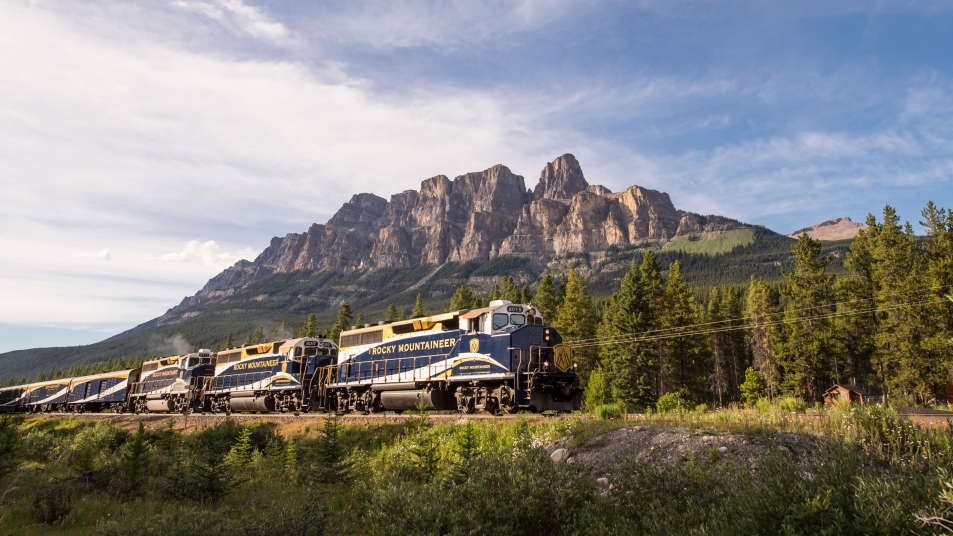 In Western Canada, rail travel and Fairmont properties have always gone hand in hand. Nearly a century and a half ago, the Canadian Pacific Railway Company (now known as CP) began laying the groundwork for the future of travel—and tourism—in Canada. Intrepid surveyors ventured deep into uncharted territory, exploring the rugged Canadian Rockies and expansive prairies to determine the best routes for the trains.

When it was finished in November 1885, the 20,100-km (12,489-mi) transcontinental route made history as the longest railway ever constructed. For the first time, passengers had front-row seats to all of the wild natural beauty that stretched between the east and west coasts.

First-class travel merited first-class lodgings, so CP’s general manager, Sir William Cornelius Van Horne, immediately set about building accommodations at key points along the route to encourage travellers to stop and soak up the spectacular scenery. Many of Western Canada’s most iconic resorts began as grand railway hotels—including several Fairmont properties. Chateaus and lodges set in breathtaking surroundings were designed to cater to adventurous spirits with discerning tastes. These historic sites have welcomed more than their fair share of notable guests, including King George VI and Queen Elizabeth. The royal couple visited each of the properties listed below during their celebrated pre-war rail tour of Canada in 1939.

Nestled in the heart of Banff National Park—Canada’s first national park and a famed UNESCO World Heritage site—stands one of the country’s earliest symbols of tourism: the Fairmont Banff Springs, also known as the “Castle in the Rockies.” This palatial National Historic Site towers over the surrounding forest at the base of Sulphur Mountain, overlooking Bow River to the north. Nearby mineral hot springs had begun to attract wellness-minded visitors in 1883, and it was clear to Van Horne that the area was destined to become a world-class destination. Upon seeing Banff’s beauty for himself, he famously remarked, “Since we can’t export the scenery, we’ll have to import the tourists.” The five-storey wooden building he commissioned in 1886 soon became one of the top mountain resorts on the continent. When a fire devastated the original structure in 1926, it was rebuilt to an even more grandiose standard by John W. Orrock, a CP engineer.

Soak up the serenity at Banff Upper Hot Springs, stroll or cycle through scenic downtown Banff, then order room service and relax in regal comfort at this French-chateau-meets-Scottish-castle.

Hold up a photo of a turquoise glacier lake surrounded by mountains, and most Canadians will assume it was taken at Lake Louise. This 4.8-km (3-mi) long glacial lake’s jewel-toned water is a postcard staple, as is the magnificent Fairmont Chateau Lake Louise that stands on its northeastern shore. The massive Renaissance Revival-style structure bears little resemblance to its predecessor, a single-storey, two-bedroom log cabin that Van Horne had built in 1890. Mountain climbers and skiers flocked to the cozy “Chalet Lake Louise,” drawn by the unparalleled landscape and the promise of adventure. The railway soon hired a pair of Swiss mountain guides to teach guests essential alpine safety skills—over the next 55 years, the area’s reputation as a destination for high-altitude activities flourished.

Head out to the picturesque lake in the early morning or evening for a more tranquil crowd-free experience, and capture your own souvenir shots of this bucket-list backdrop before unwinding in the hotel’s Fairview Bar with a signature cocktail.

A beacon of rustic-themed elegance, the Fairmont Jasper Park Lodge has ties to not one, not two, but three different railway companies. It began as a cluster of 10 tents, set up by the now-defunct Grand Trunk Pacific Railway to serve as a home base for visitors to the recently established Jasper Forest Park—a 13,000-sq-km (33,670 sq-mi) expanse of untamed wilderness that’s now the largest national park in the Canadian Rockies. When Grand Trunk went bankrupt a few years later, the Canadian National Railway (now known as CN) seized the reins and replaced the tents with eight luxuriously appointed log cabins. In 1980, CN ran into financial difficulties of its own. CP then took over ownership of the lodge and continued adding to the 283-hectare (700-acre) collection of chandelier-trimmed cabins, cedar chalets and exceptional amenities that have made this gem a beloved Fairmont vacation spot for royalty and regular folks alike.

Paddle out to the middle of emerald-green Lac Beauvert in a rented canoe, tee up for an unforgettable day on one of the country’s premiere golf courses, then dine in fine alfresco style at Orso Trattoria & Terrace.

Once the tallest building in the city, the Fairmont Hotel Vancouver cuts an imposing figure. This gargoyle-topped landmark presides over the glass skyscrapers of the downtown business district, its very presence a testament to both CN’s and CP’s commitment to establishing Vancouver as a top-notch tourist destination. When CN designed the stunning Renaissance Revival-style hotel in 1928, it was posed to compete with CP’s existing Hotel Vancouver an acclaimed hotspot that counted Babe Ruth among its star-studded clientele. Then the Great Depression derailed CN’s plans. The only way forward was to join forces with their rivals: in 1938, CP signed on as co-owners. The two former competitors worked tirelessly to finish construction in time for the impending royal tour of Canada. Their tenacity prevailed, and in May 1939, King George VI and Queen Elizabeth officially opened the third—and final—Hotel Vancouver.

Peruse some of the world’s most exclusive brands in the nearby Alberni shopping district, spend an afternoon at the Vancouver Art Gallery, then schedule a meet-and-greet with the hotel’s charming canine concierges, Elly and Ella.

Plan the Trip of a Lifetime

Exceptional service and adventurous spirit are longstanding traditions at both Fairmont and Rocky Mountaineer. Explore our rail routes and relive the wonder of those first historic journeys as you ride with us along the very same tracks first laid by CP more than 100 years ago. There’s no better way to vacation in the Canadian Rockies.

View our most popular packages for 2023 and start planning your life-changing experience.