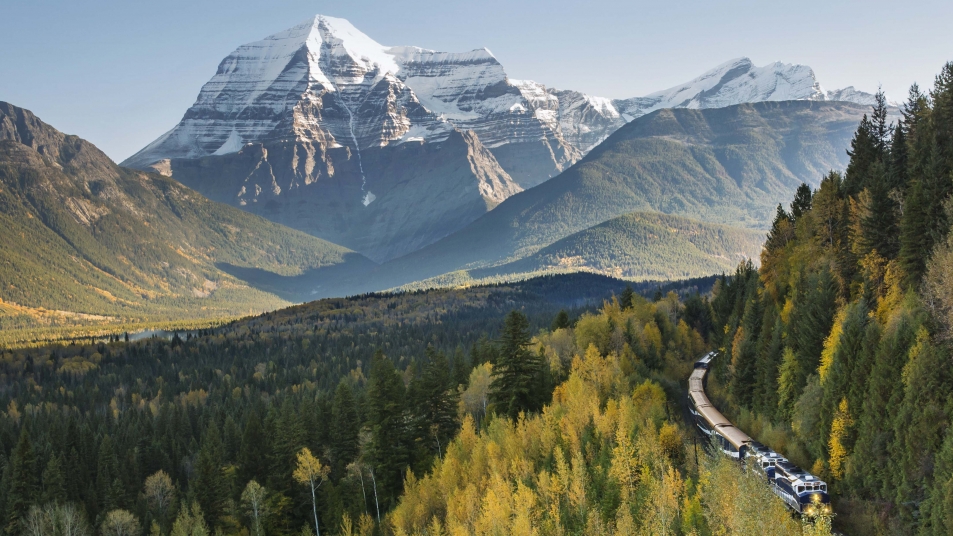 Join us on a virtual journey through Canada’s beautiful West.  Over the next few weeks and months, we will explore the dramatic scenery, tumultuous history, and the fascinating wildlife of the Canadian Rockies.

In our video below, we explore the magical mountains of Canada’s West. So sit back, relax, and let us transport you to the majestic Canadian Rockies.

Located in Washington State, the iconic Mount Baker is part of the Cascade Range. On a clear day, you can see the glacial peak of Mount Baker from the heart of Vancouver where our rail journeys usually begin.

The Cascades are a large volcanic range which extend from southern British Columbia down to Northern California. The Cascade Range is part of the “Pacific Ring of Fire”, a very active seismic region.

While Mt. Baker is part of the Ring of Fire, it’s better known for its abundance of snow. In 1998 – 99, Mt. Baker ski area set the world snowfall record with 29 meters (95 feet) of snow in a single season!

Jackass Mountain’s history is almost as peculiar as its name. Named after the mule trails that led to the Cariboo gold fields, the route was also known as “the hill of despair”. Many mules fell to their deaths as it was so steep and narrow.

In those days, transportation was very expensive ($1 per pound). With the mules being unable to carry more than 250 lbs, Frank Laumeister and John Calbreath, two entrepreneurial businessmen, thought that camels may be better suited to the trails. They purchased 23 double-humped camels and began using them to haul supplies along the Cariboo Road.

Unfortunately, the strange odour of the camels caused nearby horses and mules to stampede. The camels’ soft hooves were not suited to the rough, rocky terrain and resulted in numerous injuries. Eventually Frank and John abandoned the idea and the camels were sold or released into the surrounding hills.

The imposing massif of Mount Fitzwilliam rises 2,907m (9537.4 ft). The mountain’s most distinctive feature is the “two-tone” colour scheme. The lower half is made of dolomite whilst the upper half is composed of quartzite covered with lichen which gives it a dark gray colour.

The mountain was named in 1863 by Doctor Walter Butler Cheadle in honour of his travelling companion, William Wentworth Fitzwilliam, the Viscount Milton. They were the first tourists to ever cross Canada and had quite the adventure! While we have the pleasure of welcoming many visitors to the Canadian Rockies in luxury each year, Milton and Cheadle certainly had a slightly less luxurious experience.

If you would like to find out what travelling through this land for sightseeing in 1863 was like, they wrote a best-selling book about their trip called ‘The North-West Passage by Land’.

This mountain was named by Dr. James Hector in 1857 who noted that it looked “exactly like a gigantic castle.” In 1881, a man called Joe Healy received some silver rich ore from the area. The following year he settled at Castle Mountain and news of the silver spread fast. At one point, over three thousand people lived there; however, by 1885 it had been almost entirely abandoned as the mines failed to yield a significant profit.

From 1946 to 1979, Castle Mountain was known as Mount Eisenhower in honour of the WWII general and later the president of the United States, Dwight D. Eisenhower. However, many of the residents preferred the mountain’s old name. After many years of pressuring the federal government, the mountain’s original name was finally restored in 1979.

With an elevation of 3,954 m (12,972 ft), Mount Robson is the tallest mountain in the Canadian Rockies. Mt. Robson is a difficult and dangerous mountain to climb due to the notoriously bad weather and constant risk of avalanche. In fact, it wasn’t climbed until 1913, when a group from the Alpine Club of Canada, led by the great Austrian-Canadian guide, Conrad Kain, made the first ascent.

Mount Robson is included as a UNESCO World Heritage Site. Indigenous people in the area—Stoneys or Shuswaps—referred to Mt. Robson as “Yuh-hai-has-hun,” meaning “mountain of the spiral road to the afterlife.” The origin of the modern name is unknown, but it was most likely named after Colin Robertson, an officer of the Hudson’s Bay Company in the Peace River area.

Experience these magical mountains by train

We hope you enjoyed learning about some of Canada’s most iconic sights. Seeing these majestic mountains with your own eyes really is a magical experience. Explore our three distinct rail routes to find the perfect journey for you.

Get 4 free perks with our best offer of the year: 2X Hotel Nights, 1X Airport Transfer, and 1X Dinner when you book a qualifying 2021 package of 8 days or more.